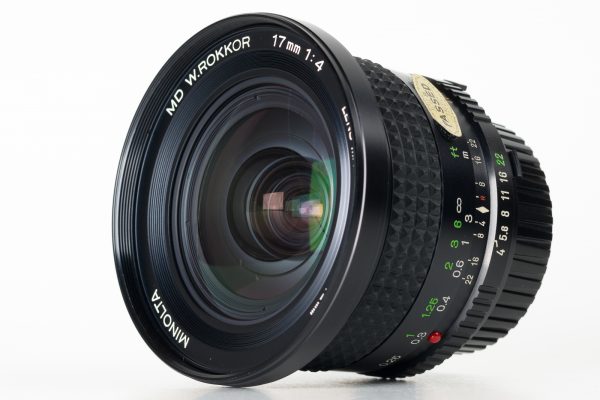 This was the widest rectilinear lens in the Minolta SR-mount range. It appeared as an MC W.Rokkor version and went on with the same optical design as the MD W.Rokkor in two slightly different versions and at last as a plain MD version. The one shown here is the second MD Rokkor version, readily recognizable by the filter thread size specification on the front lens ring, it is #16 in Dennis Lohmann’s lens list. As far as I know there wasn’t a dedicated lens hood available for this lens; a generic wide-angle 72mm hood easily causes vignetting when used on a full-frame camera like the Sony A7.

The data pertain to the version shown in this post.

Floating focussing is part of the lens design in order to maintain a well-corrected image at closer distances; as a consequence the front of the lens rotates when focussing, which complicates the use of polarizing or orientation-sensitive effect filters.

In my opinion this is one of the best Minolta SR-mount wide-angle lenses. It is not super-sharp but the sharpness extends gracefully towards edges and corners. Many other Minolta wide-angle lenses are plagued by complex forms of curvature of field, often resulting in unsharpness in a mid-zone region while corners are sharper again; the Minolta 20mm lenses are the worst offenders in this respect but also the 24mm and 28mm lenses suffer from it. The 17mm shows it to some degree but to me the imagery is still quite useable on a Sony full-frame camera.

Here’s a test shot at f/8 with the 42 MP Sony A7R2. You can click on the photo to get the full-res version but be aware that the 45 MB file might take some time to load; when loaded click on the upper-right cross for 100 % viewing.

The lens shows a large amount of focus shift, meaning that you have to refocus for optimum sharpness when changing the aperture. With a mirrorless camera this is not a problem when using the magnified view, just set the lens at the taking aperture, focus and shoot. Stopping down further than f/8 brings little extra sharpness. Centre sharpness wide-open is still quite good, but quickly drops off when going outside the centre and of course there’s more vignetting.

You can see here that corner sharpness is quite good except for the extreme part, which is only a very small portion of the frame.

The lens also shows significant geometrical distortion, which is largely but not completely eliminated by applying a custom-made profile in Lightroom.

The gallery with test pictures is made with the Sony A7 and A7R2 (last photo).

This lens usually doesn’t come cheap, prices can run up to over 400 euros. There are cheaper alternatives from Tokina or Vivitar, which are probably not as good as this Minolta 17mm; the Canon 4/17 comes in the same price range and an Olympus OM 18mm is even more expensive. I’d only get one for a full-frame camera, you don’t get your money’s worth with an APS-C camera in my opinion. I don’t use it myself really because I have the Sony FE 4/16-35 which is simply better and more convenient with its autofocus and zoom capabilities.